The Night Tube is a service pattern on the London Underground system which provides nighttime services to travellers on Friday and Saturday nights. It commenced on the Central and Victoria lines on 19 August 2016, and is planned to commence on the Jubilee line on 7 October 2016 with the Northern and Piccadilly lines to follow in autumn 2016. It was due to start in September 2015 but was delayed due to strike action. 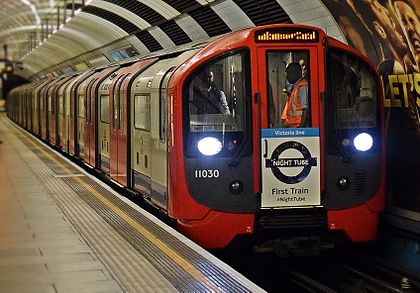 Since the London Underground’s inception, the idea of running night-time Tube services has been difficult, mainly due to night-time noise factors, and the ongoing maintenance works that usually occur during the night. General mass upgrades to the overall London Underground network from the late-1990s onwards, along with large infrastructure improvements to stations and signalling, plus the building of Crossrail (with the future probability of Crossrail 2) which will have sections going underground to connect with the main London Underground system, have made the feasibility of introducing a limited night-time Tube services a reality.

The Bakerloo, Waterloo & City and sub-surface lines have yet to be upgraded and re-signalled, but it is expected that when the signal upgrades on these lines are complete, these lines will also have 24-hour services. Part of the London Overground (Highbury and Islington to New Cross) should begin Night Tube service by 2017, while the sub-surface lines and Docklands Light Railway are planned to begin Night Tube services in 2021.

TfL announced in mid-2014 the introduction of the Night Tube. The initial plans were for a Friday and Saturday night service on a limited number of lines, with, on average, a train every 10 minutes or less, continuing from around midnight to 06:00 and into the usual morning service.

Beginning with the whole of the Jubilee and Victoria lines, and parts of the Central, Northern and Piccadilly lines, the service was planned to launch on 11/12 September 2015, with the prospect of expansion across further lines in subsequent years. However, due to strike action, the start of the Night Tube was postponed.

There has been acceptance among unions over the new terms outlined by TFL. The Central and Victoria line services started on 19 August 2016.The Jubilee line services will be ready by 7 October 2016 with the Northern Line to follow on 18 November 2016. The Piccadilly Line will follow later in 2016. 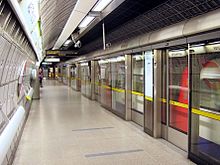 Summary of the Night Tube service: 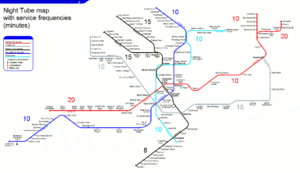 Map of the Night Tube including service frequencies

TfL estimated that the Nighttube would lead to the creation of 1,965 permanent jobs, the net additional output produced as a result equating to an additional £360m over 30 years (i.e. £12m per year). These include:

In addition to the above quantifiable benefits, other benefits TfL believe the service is likely to help create include:

Members of several unions decided to take strike action in relation to the terms and conditions being offered by London Underground, largely regarding agreements specifically over the pay deal and hours worked by new Night Tube service personnel. Members of the National Union of Rail, Maritime and Transport Workers (RMT), Transport Salaried Staffs’ Association (TSSA), and Unite officially started the first 24-hour strike at 18:30 BST on 8 July 2015, and the Associated Society of Locomotive Engineers and Firemen (ASLEF) drivers starting their 24-hour action from 21:30 BST on 8 July 2015, with disruption occurring several hours either side of the start and finish times. London Underground warned there could be no services on Thursday as a result of the walk-out. The strike affected all Tube lines and finished at 21:30 BST on 9 July 2015.

Three unions also threatened to strike on 25 and 27 August as of 12 August 2015, with talks being held to try to prevent this. ASLEF decided not to participate in the planned strikes.

On 27 August 2015 it was announced that the start date for the Night Tube had been pushed back due to ongoing talks about contract terms between trade unions and London Underground.