In London there are many sightseeing tours in tourist boats, past the more famous riverside attractions such as the Houses of Parliament and the Tower of London as well as regular riverboat services co-ordinated by London River Services. London city Airport is situated on the Thames, in East London. Previously it was a dock.

In summer, passenger services operate along the entire non-tidal river from Oxford to Teddington. The two largest operators are Salters Steamers and French Brothers. Salters operate services between Folly Bridge, Oxford and Staines. The whole journey takes 4 days and requires several changes of boat. French Brothers operate passenger services between Maidenhead and Hampton Court. Along the course of the river a number of smaller private companies also offer river trips at Oxford, Wallingford, Reading and Hampton Court. Many companies also provide boat hire on the river.

The leisure navigation and sporting activities on the river have given rise to a number of businesses including boatbuilding, marinas, ships chandlers and salvage services.

The Air Line aerial cable system over the Thames from the Greenwich Peninsula to the Royal Docks has been in operation since the 2012 Summer Olympics.

The river is policed by five police forces. The Thames Division is the River Police arm of London’s Metropolitan Police, while Surrey Police, Thames Valley Police, Essex Police and Kent Police have responsibilities on their parts of the river outside the metropolitan area. There is also a London Fire Brigade fire boat on the river. The river claims a number of lives each year. 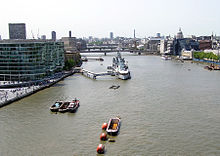 Pool of London looking west, from the high-level walkway on Tower Bridge. Click on the picture for a longer description

Rubbish traps are used on the Thames to filter debris as it flows through central London.

The Thames is maintained for navigation by powered craft from the estuary as far as Lechlade in Gloucestershire and for very small craft to Cricklade. From Teddington Lock to the head of navigation, the navigation authority is the Environment Agency. Between the sea and Teddington Lock, the river forms part of the Port of London and navigation is administered by the Port of London Authority. Both the tidal river through London and the non-tidal river upstream are intensively used for leisure navigation.

The non-tidal River Thames is divided into reaches by the 44 locks. The locks are staffed for the greater part of the day, but can be operated by experienced users out of hours. This part of the Thames links to existing navigations at the River Wey Navigation, the River Kennet and the Oxford Canal. All craft using it must be licensed. The Environment Agency has patrol boats (named after tributaries of the Thames) and can enforce the limit strictly since river traffic usually has to pass through a lock at some stage. A speed limit of 8 km/h (4.3 kn) applies. There are pairs of transit markers at various points along the non-tidal river that can be used to check speed – a boat travelling legally taking a minute or more to pass between the two markers.

The tidal river is navigable to large ocean-going ships as far upstream as the Pool of London and London Bridge. Although London’s upstream enclosed docks have closed and central London sees only the occasional visiting cruise ship or warship, the tidal river remains one of Britain’s main ports. Around 60 active terminals cater for shipping of all types including ro-ro ferries, cruise liners and vessels carrying containers, vehicles, timber, grain, paper, crude oil, petroleum products, liquefied petroleum gas etc. There is a regular traffic of aggregate or refuse vessels, operating from wharves in the west of London. The tidal Thames links to the canal network at the River Lea Navigation, the Regent’s Canal at Limehouse Basin and the Grand Union Canal at Brentford.

Upstream of Wandsworth Bridge a speed limit of 8 knots (15 km/h) is in force for powered craft to protect the riverbank environment and to provide safe conditions for rowers and other river users. There is no absolute speed limit on most of the Tideway downstream of Wandsworth Bridge, although boats are not allowed to create undue wash. Powered boats are limited to 12 knots between Lambeth Bridge and downstream of Tower Bridge, with some exceptions. Boats can be approved by the harbour master to travel at speeds of up to 30 knots from below Tower Bridge to past the Thames Barrier.

History of the management of the river

In the Middle Ages the Crown exercised general jurisdiction over the Thames, one of the four royal rivers, and appointed water bailiffs to oversee the river upstream of Staines. The City of London exercised jurisdiction over the tidal Thames. However, navigation was increasingly impeded by weirs and mills, and in the 14th century the river probably ceased to be navigable for heavy traffic between Henley and Oxford. In the late 16th century the river seems to have been reopened for navigation from Henley to Burcot.

The first commission concerned with the management of the river was the Oxford-Burcot Commission, formed in 1605 to make the river navigable between Burcot and Oxford.

In 1751 the Thames Navigation Commission was formed to manage the whole non-tidal river above Staines. The City of London long claimed responsibility for the tidal river. A long running dispute between the City and the Crown over ownership of the river was not settled until 1857, when the Thames Conservancy was formed to manage the river from Staines downstream. In 1866 the functions of the Thames Navigation Commission were transferred to the Thames Conservancy, which thus had responsibility for the whole river.

In 1909 the powers of the Thames Conservancy over the tidal river, below Teddington, were transferred to the Port of London Authority.

In 1974 the Thames Conservancy became part of the new Thames Water Authority. When Thames Water was privatised in 1990, its river management functions were transferred to the National Rivers Authority, in 1996 subsumed into the Environment Agency.

The river as a boundary

Until enough crossings were established, the river presented a formidable barrier, with Belgic tribes and Anglo-Saxon kingdoms being defined by which side of the river they were on. When English counties were established their boundaries were partly determined by the Thames. On the northern bank were the ancient counties of Gloucestershire, Oxfordshire, Buckinghamshire, Middlesex and Essex. On the southern bank were the counties of Wiltshire, Berkshire, Surrey and Kent.

The 214 bridges and 17 tunnels that have been built to date have changed the dynamics and made cross-river development and shared responsibilities more practicable. In 1965, upon the creation of Greater London, the London Borough of Richmond upon Thames incorporated the former ‘Middlesex and Surrey’ banks, Spelthorne moved from Middlesex to Surrey; and further changes in 1974 moved some of the boundaries away from the river. For example, some areas were transferred from Berkshire to Oxfordshire, and from Buckinghamshire to Berkshire. On occasion – for example in rowing – the banks are still referred to by their traditional county names.